I got a little pom pom happy while watching a movie tonight.  I could make pom poms all night.  They are festive and fuzzy and girly.  I need a little ‘girly’ sometimes in this household of boys.

I had some orange yarn, black yarn, and a cardboard circle, so I developed this: 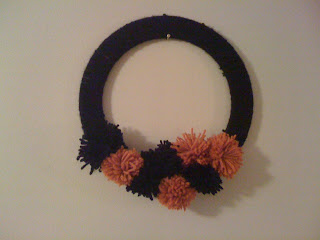 It needs a little zing, though, any ideas?
Now, I know you are dying to make your own pom poms, right?  They are easy.
Step 1
Trace a circle onto a piece of cardboard the size you want the pom pom to be (I used the lid of a snack trap).  Then, trace a circle in the middle of the first circle (I used a baby bottle lid).  Cut it out.  Repeat so that you have 2 same size pieces of cardboard shaped like doughnuts.
﻿ ﻿﻿﻿
﻿ Step 2
Put the two cardboard circles together and wrap yarn around it until you cover the whole circle.  More yarn makes a fuller pom pom.
﻿
Step 3
Holding onto the yarn, cut around the outside edge.  As you go, thread a piece of yarn between the two pieces of cardboard.  Pull tight and tie a knot.
﻿
Step 4
Pull out your pom pom and fluff!
﻿ ﻿

Previous Post: « My Kid Was "That Kid" at School Today…
Next Post: I spy with my little eye… »