We bought our house from a real estate agent that had great taste in paint colors.  However, her tan color choice for the living room clashed badly with my gray sectional and made it look a hideous blue. Each time I walked into that room I cringed.  So, I decided to take matters into my own hands and fix it.  King Phekus was skeptical, but he gave me the green light.  I had three goals:

I fell in love with the idea of using tree decals on our large, empty wall to give it some dimension, but they were so expensive.  So I started to think, could I make them on my own? It was not like I desired a very intricate design.  So I slapped a coat of gray paint on the wall and bought a few rolls of Con-Tact paper.  I drew some free-form tree shapes on the back on the paper, cut them out, taped them to the wall with painter’s tape, pulled off the back, and voila!  They look painted on, but they peel off easily if I get sick of them.

I was then inspired by these Stray Dog knockoff tables from Meet Me in Philadelphia, and made a set of three as end tables. (Note the deer head on the wall.  I had just watched the Antonio Project episode where he mounted a large, pink Rhino head in a hotel room.  I would have totally done something like that just for the quirky humor of it, but King Phekus put his foot down there.)

I finished off the room with an eclectic, upcycled wall of art.  The frames were all dollar finds at local antique stores and garage sales, spray painted white (in the wind on a tarp in my driveway.  The proof of the project still exists on the black top.  Whoops.)  The Audubon-style bird print was a cheapy from an antique store – almost identical to the one found at PB last spring (for much, much more).  The gray and yellow bird print and the stamped dictionary page were etsy finds.  The white bird in the center was another Con-Tact paper freehand design.  I added a bird’s nest from Amazon to a small shadow box above the white bird.  Finally, the last frame was filled with a piece of gray and white fabric. 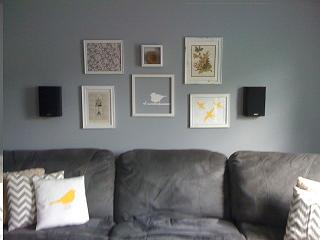 So, this was my summer project, what was yours?