I had high hopes as Buddy pulled me down the hallway to his classroom this morning claiming, “I’m ready!  Go to ‘cool [sic], now!”  The first day of school sets the mood for the year…unfortunately, my child screamed, “Mommy!” with the blood-curling scream usually reserved for when Olive, our pug, is found under the table beheading his Lego men.  I left the room and left him with his teachers who immediately consoled and distracted him.  I fretted for the next hour and a half about whether he would scream the whole time or whether he would pull it together.  I went to Barnes and Noble to distract myself and chose a few kids’ magazines that I had promised Buddy during potty time this morning.

[Note:  Potty training is no fun.  Buddy asks to sit on the potty, but rarely does anything.  Instead he waxes poetic about “how hard it is” and how he “wants a mag-zine [sic]” and how Mac World “is not a good potty mag-zine [sic]” nor is The Atlantic or Women’s Health, for that matter.  He sits and sits and then puts on a diaper and goes.  (Then screams to be changed.)]

There are a LOT of magazines for toddlers, eh?  After some deliberation I decided on My Big Backyard and High Five.

These are great magazines with simple texts, games, crafts, and puzzles for preschoolers.  I had really high hopes for National Geographic for Little Kids but it was more like a booklet than a magazine.  So disappointing!

When Buddy came out of school today holding his teacher’s hand, he was all smiles.  The teacher kindly assured me that he had calmed down right away.  I gave him the magazines when we got in the car and asked him about his day.  He said, “I played trains.  And cars.  And a sandbox with shells in it.  We read a book about a froggy.  We played drums and blocks.  We sang a song and colored.”  I told him that sounded like a great day and he said, “I love [teacher’s name].”  (He has never even said he loves me!)  I love his teacher because she made him love her.  Thank you!!!!!

When we got home, we made a special box to hold his magazines near his potty so that he would not freak out when he couldn’t find them know where they were whenever he *needed* them.  I used to do this with my second graders when I was teaching to help them keep their weekly Time for Kids magazines in one place. I found an old Uggs box that was just the right size to hold the magazines without bending them.  While I thought about recovering the box and making it fancy, I realized that I probably should let Buddy do what he wanted to do.

So I handed over some stickers and the box.  And a half hour later, I have the gawdiest magazine holder available for my bathroom.  But it is his creation, not mine. 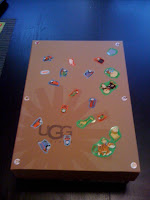 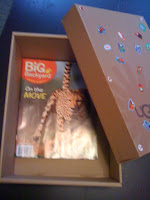